WBC-INCO.net: SUCCESS STORIES ON INNOVATION from THE WEST BALKAN

An inspiring success story from FYR of Macedonia Mr.Ilija Nasov on new ideas and novel applications

From the early stage in my life, I have been always interested to do something novel and original, something creative and unique, better than the exsisting technologies and products. I have always looked to improve the things (in the area of my interest) and offer useful products and/or technologies that all mankind will benefit. With this in mind and concerned about the decrease of the level of fossil energy sources from day to day, I started intensively to look into alternative energy sources, particularly the solar energy, and how I can contribute to resolving the global energy concern. 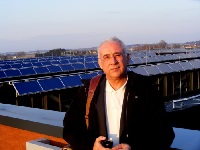 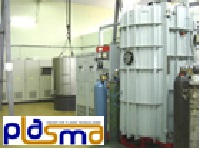 Having some novel ideas for improved harvest of the solar energy and its efficient transformation into heat, I have founded Plasma Ltd. together with two other business co-partners (www.plasma.com.mk). Today Plasma Ltd. is a privately-owned company, focusing on leading-edge research and innovation in the area of solar energy and surface engineering. Most of the efforts of Plasma team and the financial resources are directed towards development of novel technologies, processes, and particularly, variety of tailor-made coatings for solar as well as for surface engineering in other industrial and functional application.

Lately, Plasma’s special coatings have been intensively explored to be applied in food industry, for polymer-based composite solar collectors, CPC composite reflectors, but also for bio-degradable food packaging.This requires Plasma team to stay abreast of new materials and technologies; therefore, we try to be aware of the academic and industrial trend going on in the area of materials science and engineering, surface engineering, nanotechnologies, thin films and coatings, etc. Our knowledge and expertise expand on a daily basis by taking participation in numerous international meetings, workshops, exhibitions, congresses and conferences, attending special training and education courses, and via collaboration with leading research institutes, companies and universities in the region and internationally.

Generation of new ideas and novel applications, envisioned by the Plasma team, resulted in successful application for several national projects, sponsored by the Ministry of Education and Science of Republic of Macedonia. This led Plasma to win the Balkan Award, organized by the World Bank of Innovative projects in 2006. The national projects’ results and outcome were outstanding motivation and stimuli for us; the successful execution of the national projects gave us more confidence to go ahead and apply for international project calls. Surprisingly, we found ourselves that we actually possess an extensive knowledge and expertise in the area of surface engineering that is competitive on an international level. In this context, I would like to mention the project grant obtained through the Austrian Agency for Development, which focus was incorporation of solar thermal collectors in façades and roofs of residential buildings and houses. Also, we have completed successfully two EUREKA projects. Our international co-partners recognized our expertise and efforts, which led us getting financial support for five FP7 projects sponsored from European Commission. Within these projects we have started collaboration with proven EU institutions and world-recognized scientists and business-partners. 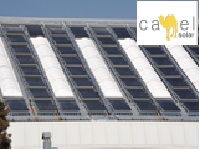 Having some novel ideas for improved harvest of the solar energy and its efficient transformation into heat, I have founded Plasma Ltd. together with two other business co-partners (www.plasma.com.mk). Today Plasma Ltd. is a privately-owned company, focusing on leading-edge research and innovation in the area of solar energy and surface engineering. Most of the efforts of Plasma team and the financial resources are directed towards development of novel technologies, processes, and particularly,About two years ago, our expertise in the solar thermal collectors resulted in foundation of a new company Camel Solar (www.camel-solar.com).

It mainly focuses on manufacturing of different types of solar collectors with improved efficiency and novel designs. The original solution of absorbers with better heat transfer in vacuum-tube collectors, as well as flat-plate collector absorbers with the highest heat transfer coefficient without a humidity issue, found attractive applications - starting from the standard uses to those in façades and windows module. variety of tailor-made coatings for solar as well as for surface engineering in other industrial and functional application.

I, as a Professor appointed at different Departments at few local Universities, also teach several courses in the area of Surface Engineering, Solar Energy and Management of Innovations, where among the other topics, I try to transfer my experience of successful application for FP7 R&D projects to my students and colleagues. I would like to give my personal opinion for a successful FP7 project application: 1) possess a high level of knowledge and expertise in the area of project application (i.e. always be aware of the state-of-the-art in your field); 2) be creative with ideas for a better, competitive, eco-product or service in order to achieve a good position on the existing market; 3) The last, but not less important, have a motivation, be a self-starter and think “out-of-the-box”. 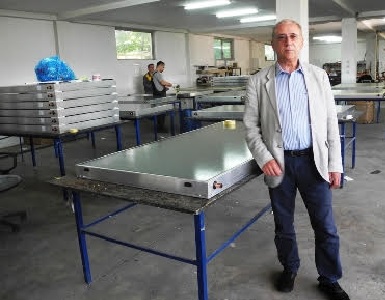 During the last days of May, it got rather heated in Skopje, Macedonia’s capital – politically and climate-wise. While the summer sun was providing all the warmth it could muster, the nation’s deputies gathered in the Macedonian parliament building to form a new government, bringing an end to a years-long and severe political crisis. The Former Yugoslav Republic of Macedonia, a small Balkan country with a strikingly viable solar thermal industry, has since been headed by Zoran Zaev, a member of the Social Democratic Union party. Assistant Professor Ilija Nasov (see photo) has high hopes for the new government. In 2012, when Nasov was dean of the Faculty of Ecological Resources Management at MIT University Skopje, he founded collector producer Camel Solar, located on the northern outskirts of Macedonia’s capital.

With around a dozen staff, Camel Solar manufactures absorbers, evacuated tube and standard flat plate, but also novel facade-integrated window collectors. With offices in the UK, Hong Kong and Shanghai, Camel Solar has been selling its products in Macedonia and the Balkans, in Western Europe and even in China. Its R&D sister company, Centre for Plasma Technologies – PLASMA, has specialised in the design of selective PVD coatings for solar absorbers among other things.

Past years have seen Nasov and his colleague, Professor Anka Trajkovska Petkoska, participate in fairly many European-funded research projects. Some of their results have been used for the design of the company’s new integrated window collector incorporated into the south facade of the Camel Solar factory. “As our new and innovative Camel Solar absorber can be integrated into existing window frames, it has little impact on architectural design. And without humidity present, efficiency doesn´t decline gradually,” the founder of Camel Solar explained. 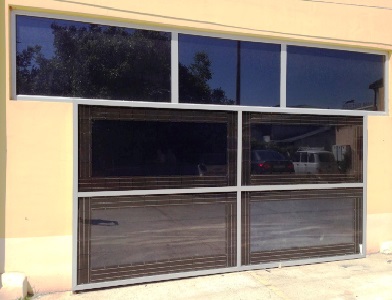 But why Camel Solar? “We´ve named our company after the animal with perhaps the most efficient water and temperature control system,” Nasov said. He holds several patents on absorber technology and has recently published a handbook for students on climate change and renewable energies. He is also the chair of Solar Mac, the Macedonian solar association, home to Macedonian businesses, such as Camel Solar, Euroterm Solar, Eco Solar, Solar Tubes and Leov Company, as well as Austrian-based Tisun.

The professor thought it unfortunate that the government had introduced few measures to support solar thermal energy in Macedonia and granted too few subsidies; a mere EUR 300 for each of several hundred residential solar thermal systems, adding up to EUR 90,000 a year. Additionally, there was a preferential VAT rate of 5 % on the purchase of a solar water heater. “Macedonia has many thermosiphon systems of Chinese origin. Of course, they are cheaper, but their quality is inferior to our Solar Keymark-certified products,” Nasov said. Internationally, he didn’t see much movement on the solar thermal market, whereas photovoltaic systems had been growing dramatically in number. Nasov named PV’s declining prices as one reason for the boom; the other was larger subsidy amounts not available to solar thermal. There was also fierce competition from other technologies such as heat pumps and wood pellet boilers. But in terms of environmental benefits, solar thermal is leading, Nasov is convinced.

PV and solar thermal manufacturers have long focused entirely on their own technology. Now, the time had come to combine the benefits of both in one system, Nasov said. He pins his hopes on the new government, expecting an improved business environment for solar collector manufacturers to follow the normalisation of the political one in Macedonia. Overall, he was optimistic about the future of solar thermal, as it had great potential not only for providing hot water and space heating and cooling in residential buildings, but also in swimming pools and spa centres, hotels and greenhouses, and industries with large demand for hot water.